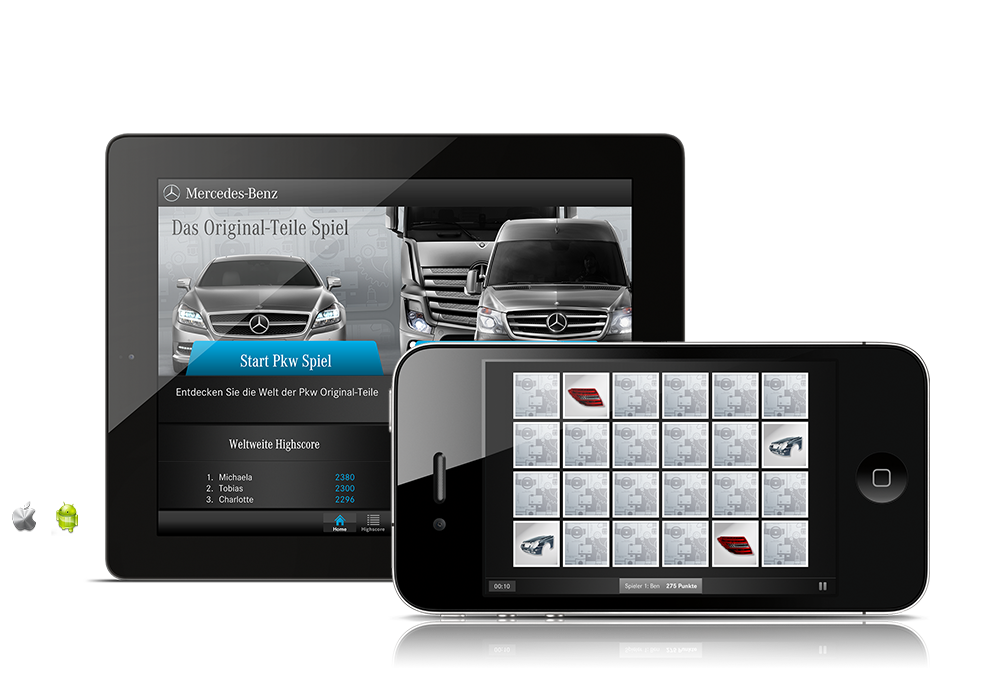 PLAYFULLY GET TO KNOW THE ORIGINAL PARTS

The task Mercedes Benz gave us was exciting: Playfully convey the topic of original auto spare parts to our customers Our solution: a memory game. We developed a game where two opponents challenged each other on two touch screens.

The game was a real crowd puller at Mercedes-Benz’ Genuine Parts booth at the IAA 2012. The feedback was so overwhelmingly positive, that the department suggested expanding this idea on a worldwide scale, and not only limited to shows. We picked up the idea once more. Our new solution: the Mercedes-Benz Genuine Parts App. For the app, we implemented synergies: As the PC application had been developed using Flash, we were able to adopt large parts of the game’s logic. We added a joker, as well as a point-multiplying element, along with a new ‘highscores’ system. We created a fresh on-screen design, one that was super responsive and optimised for platforms such as smartphones and tablets.
Thanks to the Flash basis of the app, it can easily be used on the major mobile operating systems, iOS and Android. The next challenge we faced was multilinguilaty, as the app is being used worldwide.
We developed versions of the app in 7 languages. We started with simply translating the app language, before taking rtanslation a step further, and adopting certain marketing messages and the legal checks specific to each country.

SAVINGS ON DEVELOPMENT AND TESTING

MEET US IN PERSON

We are looking forward to you.